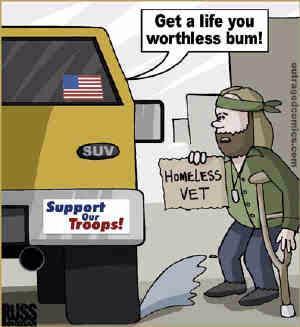 The solution to this is really very simple. What’s needed is to establish tent cities in all urban areas. This was done in the great depression of the 1930s. Today, this is also being done around the world in many of the poorer countries as a way of consolidating resources. Presently, many major urban areas in the United States have tent cities. In Portland, Seattle, as well as in many other urban settings across the country, there are tent cities, both recognized and unrecognized.

Even the recognized tent cities run into problems. For example, various city authorities may often require “permits” for the camp to be there. Or they may put ridiculous “health and safety” requirements on the tent cities, thus preventing them from being established.

Despite the desperate need for tent cities and the associated support structures that could help get people off of the streets, into jobs, and into society, few seem willing to listen. Neither are many willing to lift a finger to help. The other great obstacle before us is even if we obtain “permits” and satisfy “health and safety” requirements, what then? This is where the “homeless service providers” come in.

These so-called “homeless service providers” have been handing out soup, blankets, and clothes for years. Well, now it is time for them to team up with other “providers” to help get these people proper help, the kind of help that will get them off of the streets and keep them off the streets.

The tent city can help do this. They can provide these services infinitely more efficiently than now. Tent cities can gather the homeless in one place instead of having them scattered everywhere. Scattering the homeless is what the city’s anti-camping ordinances have done. Tent cities can organize the homeless into a cohesive system that empowers them to take responsibility for their own lives and needs. They can now legitimately help the homeless to become independent in a more permanent fashion than the programs that isolate different aspects of independence.

In part 2 of these articles, I would like to share with you some of my experiences while participating in a tent city. I hope to help you to understand the structure of how a tent city works.

My Experience in a Tent City
When I first went to a tent city, it was located at a church in Seattle, Washington, called “Church by the Side of the Road.” The camp personnel were exceptionally kind to me. When I arrived, they took my information. Their security got me some coffee and something to eat. By the time I was done with my intake, which included an explanation of the rules and requirements, I had already signed up and chosen a few security shifts, and I already had a bed. Within a week I had my own tent, and the entire time I was at tent city I was free to come and go as I pleased, as long as I met my requirements. These were to serve a prescribed number of security shifts and to earn one community credit a week.

After four months of being there, residents elected me to be on the executive committee, which is kind of like a city council. I served on this committee for a combined 6 months and managed to do quite a lot of good for the tent city. The local community gave us some incredible support and more and more help. Several people were able to get jobs and permanent homes. These things led me to an understanding that tent cities are so much more than just another shelter. Tent cities are hope, and that is what our homeless need.

Hopefully you will find a better understanding of how tent cities do this when you read this outline of their structure in the second article of this series.